Why Marketing and Customer Experience Need to Be Synced 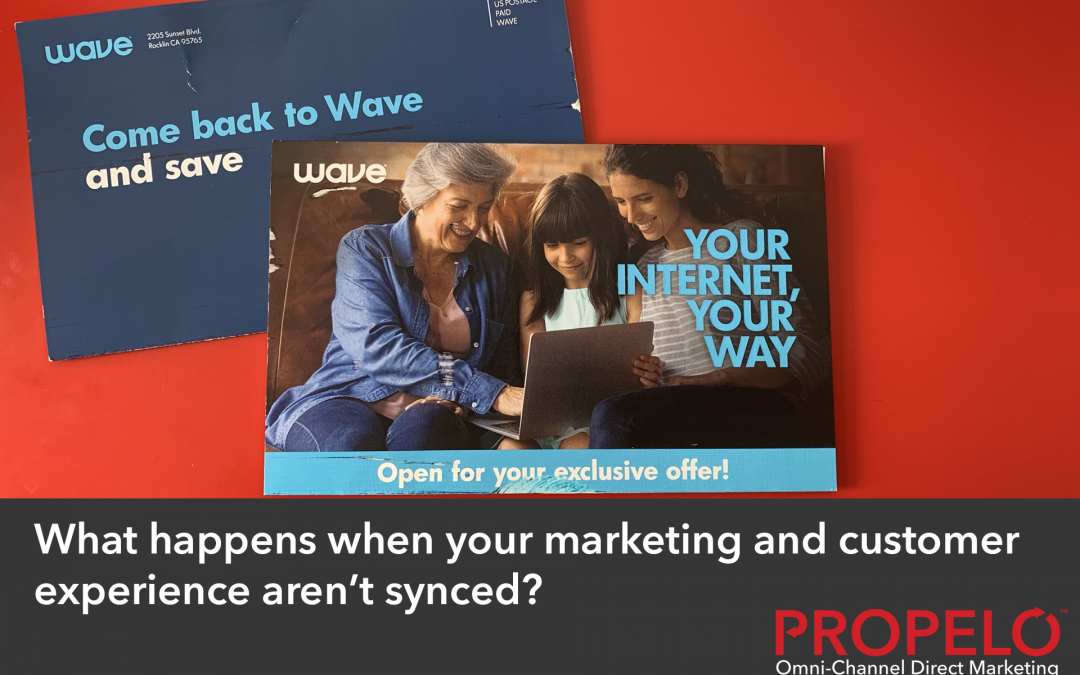 UPThis is a cautionary tale of the delicate intersection between marketing and customer experience.  In an ideal world these two will reinforce one another, but unfortunately many times these are managed and executed by different departments.  In this instance they can actually serve to alienate customers in a foolishly avoidable fashion.

A couple years ago I moved into a new condo and one of the very first things I did was sign-up for a new internet service provider.  At the time I had the option of two providers.  Both had solid reviews but between the two one’s branding was significantly stronger.  At the time I felt like that would be a reflection of the services provided, so I ended up going with Wave Broadband.

The initial install appointment proved to be a challenge getting scheduled.  I’ve worked remote for over three years and needed to have the install asap, but the earliest install was about a week out.  After explaining the necessity to get the install asap I was connected with an area manager who made a point to stop by on his way home so he could personally conduct the install.  I was impressed with this level of service and felt that my ISP selection had been validated.

Aside from a couple service disruptions, most of which were weather related, the internet was consistent and high quality covering all of my needs from work to entertainment streaming.  Everything was going well until one month I got my bill and noticed that the rates had gone up significantly.  Having experienced this with my previous ISP, I knew that if I called in to inquire it was likely that I’d be able to get a discount.

While this was true the call did not go as I would have expected.  After reviewing my account the CSR informed me that for the next 6 months he would be able to get me an even lower rate than I’d originally been paying.  I explained that I didn’t want a bigger discount, I simply wanted to pay the same rate I’d be paying before.  In fact I explicitly stated I’d be willing to pay more than what he was offering if I didn’t have to perpetually go through this song and dance every six months.

Policy is policy he said and this new lower deal was the best that he could do, but he informed me that as long as I called before the end of the six months that they would renew it.  Skeptical I asked him to repeat that, after which I asked him to make a notation to my account reflecting this offer.  He assured me that it was correct and that he’d noted my account accordingly.

Fast forward nearly six months and I call in to renew my plan.  I’m quickly informed that not only am I not getting a continuation of my plan, but there are no notes in my account reflecting the previous conversation.  Rubbing salt into the wound, I’m told that there are no new deals available for me at all.  Knowing that the CSR was simply doing their job I asked to speak to a manager and I’m told none are available and that even if they were I would be presented with the same information.

As a business owner, moments like these hit on multiple levels.  Fundamentally I’m a consumer in the moment, but I also think from a corporate level how things could have been done differently.  I ponder if there is some forecast model for ISPs that know their pricing model is going to alienate a certain percentage of customers, but in the long term it “maths” out.  I then wonder why hasn’t someone created a better model?  While I contemplate all of these thoughts one thing is clear and I state it plainly to the CSR, “I have to let you go now as I clearly need to go and find a new ISP.”  She politely asks if she can “help” me anymore, but we both know this obligatory statement is just the awkward end to a poor customer experience.

At this point I went with the alternative ISP option, and once it had been installed I called to cancel my Wave service.  I was at least asked “why” and upon telling them it was based upon poor customer experience there was literally no effort to attempt to try and keep me as a client which I found disappointing from a business perspective.

As I mentioned before, Wave has got solid branding.  It’s clean both visually and from a messaging perspective.  They’ve chosen a soothing blue color pallet which is a nice differentiator from the red that a notable national ISP uses.  They offer compelling plans and offers that are easy to understand and choose from.  So what went wrong?

The disconnect between customer experience and marketing at Wave quickly became apparent when about a month after canceling my service I received a mailer with a headline, “Come back to Wave and save”.  The piece looked good, and seemed catchy, but as you can imagine it landed like a fart in church.

It felt ironically moronical to be holding a static marketing piece offering me a discount, for two years no less, when only a few weeks earlier a live person on the phone could do nothing.  The piece also offered a “reward” of a free 12-month streaming device on top of the discount.  To make matters worse I would receive this same mail piece three times over the course of a month.  (UPDATE: Just got a 4th mailer on the same day I posted this)

It’s a common sentiment that it’s five times more expensive to acquire a new customer than to keep an existing one.  So I’m pondering why wouldn’t the marketing team have reached out to me with offers and rewards while I was still a customer?

As I reflected on this marketing strategy and the customer experience, I genuinely felt like there was a valuable business opportunity for Wave.  If they could just make a couple adjustments to sync their marketing efforts, along with their customer service policies, they could likely do three things.  They could reduce attrition, convert marketing dollars from trying to bring back customers to simply keeping them and ultimately create customer loyalty.

Even though as a consumer I’d taken my wallet away from Wave, I still felt like the right thing to do was to try and connect with someone at HQ.  Granted my experience is a sample size of one but I was confident that I couldn’t be the only one going through this.  If nothing else, I’ve also interviewed some of the top customer experience experts in the world this year and could share their input and contact info.

Turning to LinkedIn I failed to find anyone working there with “customer experience” in their title so I zeroed in on a few marketing contacts from the director level to the management level.  I sent three connection requests with personalized messages.  Given the experiences that led up to this point I should have been prepared for what happened next, but it still surprised me.  I got zero connection back and not a single reply.

I’m confident that Wave is going to continue to grow because they do have a lot going for them.  I just wonder how much faster they could grow if they shored up some of these issues?