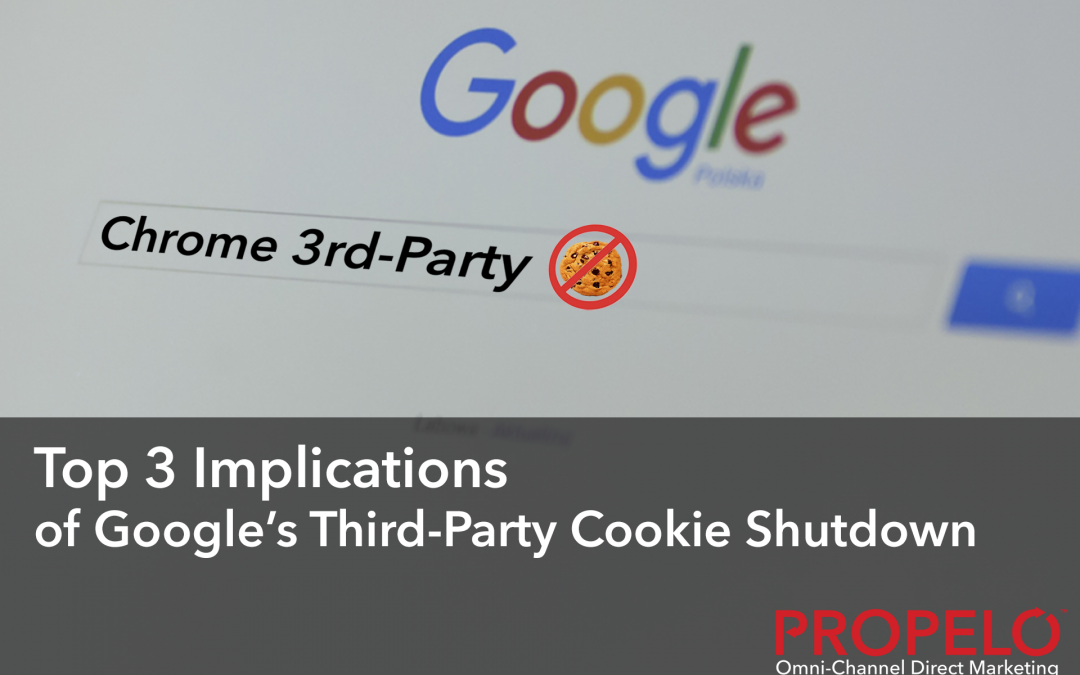 In January it was announced that Google’s third-party cookies are going away, and since then there has been a lot of discussion about what this means to the future of marketing.  Today we’re going to detail what these changes are going to be, how the pending changes are already impacting your marketing, and what alternatives you have.

As an aside, I want to make it clear that many of the changes that Google is proposing, and others have already implemented, are done so in the spirit of consumer privacy.  I’m going to refrain from passing judgment if that’s really true, or if these changes are to get ahead of regulatory reform, to reshape the competitive landscape, or if they’re just good business following customer demand.


While commonly understood, it’s important to recap the function of cookies so we can understand the impact of Google’s third-party cookie restrictions.  To simplify this I’m going to use selling residential real estate as an example of how cookies function.

First-party cookies are an example of a homeowner selling their home on their own, commonly known as For Sale By Owner (FSBO).  As the homeowner hosts an Open House over the weekend, imagine someone coming in to view the home, and upon seeing the back yard they state, “Would you look at the view out back.”  Hearing this, the homeowner could use this information to say, “If you like that view, wait until you see the deck off the master bedroom on the top floor.”  Essentially, the homeowner is using information gained as people walk through the house to personalize and provide a more tailored experience.

For third-party cookies I want you to envision the more conventional home selling experience where a Realtor is involved.  Imagine that Realtor was able to collect information on every other house you’ve previously toured.  What rooms you spent the most amount of time in, where you expressed interest in what you liked and what you didn’t like.  The Realtor can now tailor content and reach out to you with properties that you’re going to be more inclined to want to see, and ultimately buy.

That’s essentially how Google third-party cookies work.  While these cookies can be used for different things, they’re most prominently leveraging your internet history across hundreds/thousands of sites, to deliver relevant digital marketing to you.

Consumer privacy, or more aptly the concern around it, is nothing new.  However, telling consumers how their data is being used has become more prevalent in recent years.

In fact, the EU’s General Data Protection Regulation (GDPR) changes have largely become the adopted best practices for organizations and site owners outside of the EU.  Following the GDPR, Apple took a big step and started restricting third-party cookies with their browser Safari.  This was then followed by Mozilla’s browser Firefox a short time later.

As mentioned before, I’m not passing judgment on why Google’s third-party cookies are being phased out, but the why now simply feels like they don’t want to be “tardy to the party.”  What’s interesting here though is that they’re phasing this out over two years because they don’t want to cut off current revenue share models at the knees.

They’re currently working on an alternative to Google third-party cookies called Federated Learning of Cohorts (FLoC).  This is still going to track users at an individual level, however, rather than turnover that individual data, they’re going to bunch people into “like” cohorts, that advertisers can use to target; think “birds of a feather” mentality.

First off, you’re digital marketing is likely already being impacted by the changes discussed in removing Google’s third-party cookies.  Even though Google has stated that there will be a two-year timeline they’d previously already given the keys to individuals to restrict the sharing of their browser activity.

Furthermore, the cookie changes that Google is working to implement have already been tackled by Safari/FF and countless individual sites through the passing of GDPR.  As a result, ad platforms that rely on third-party cookies have already been experiencing shrinkage in available target audiences.  Because Chrome is the dominant browser these days (nearly 65% of all browser usage), it’s likely that you just haven’t noticed the shrinking universe.  Once their changes go into effect there will be significant disruptions in the current digital marketing ecosystem.

It’s important to note that these changes will not impact first-party cookies, so you’ll still be able to benefit from your own domain’s data.  For most people though looking to target new users, their own domain is too small of a pool which is where ad-platforms leveraging third-party data has been so vital over the years.

What’s hard to miss with these changes though is the additional control it gives to larger first-party platforms like Google and Facebook.  Per Hubspot, The Association of National Advertising and the American Association of Advertising Agencies have already come out saying these changes reduce the fairness of competition, and healthy competition generally favors the consumer in availability and pricing.

We all know that we shouldn’t be too reliant on one marketing channel, but given the dynamic and accurate targeting abilities of digital advertising, it’s hard not to stress these pending changes.

The good news is that we already began feeling this stress when Apple began making changes to Safari.  We began looking for viable alternatives that would still allow us to target, and deliver media at an individual level.

What we found was a new marketing model that marries targeted data demographical data with pin-point accurate geofencing tracked in real-time.  Similar to how Google’s third-party cookies target activity across the web, geofencing allows you to track individuals as they interact with businesses or locations in the real world.

Two primary geofencing strategies we’ve been using are conquesting and affinity marketing.  Geo-conquesting allows you to track visitors of competitors allowing you to deliver digital media differentiating your brand and offering.  Affinity geofencing helps you track your ideal shoppers in locations where they often frequent.  A client example of this is a large chain pet food store that we’re helping to target dog parks.  Given they’re a higher-end pet food company we’re also geofencing Whole Foods Market shoppers, and then filtering only those that have pets using demographical information.

As the famed author, John C Maxwell put it, “Change is inevitable, growth is an option.”  I hope this information puts you in a better position for the latter, but if you’d like to talk more about the pending Google’s third-party cookie changes and alternatives, give us a call at 415.648.7787 or email us at ideas@propelomedia.com.