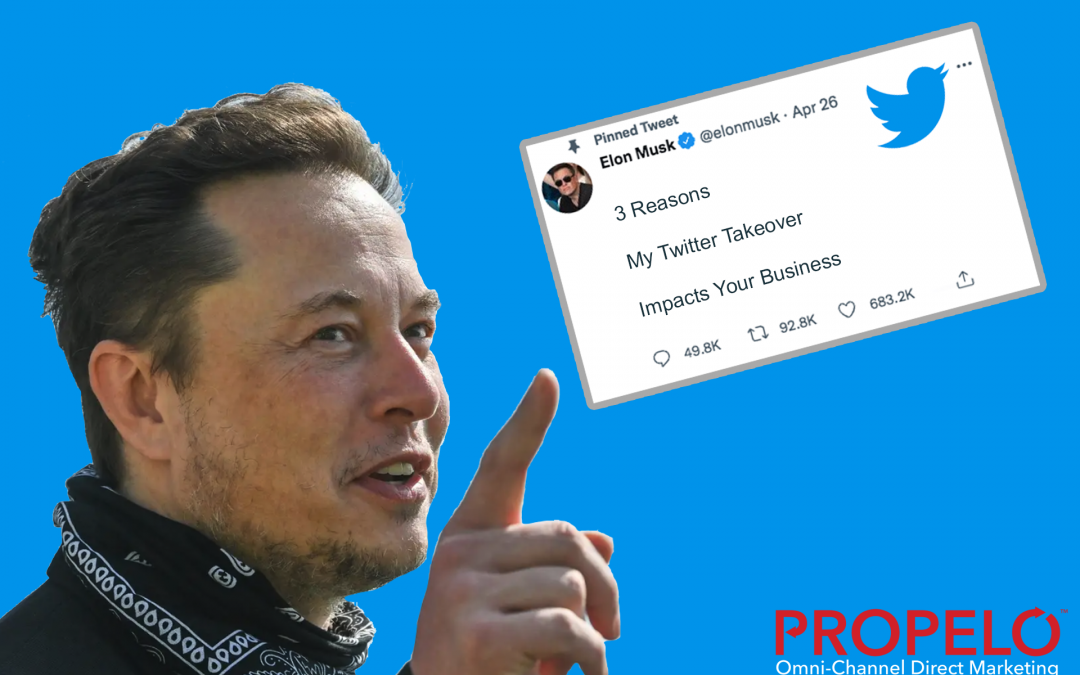 In the surface it’s easy to see Elon Musk’s acquisition of Twitter as the musings of the world’s richest person buying a fancy toy simply because he can.  To be fair, there’s probably some truth to that.  After the craziness of how this deal came together wears off, there are three important takeaways that directly impact your business.

You’ve heard me say it before, but your customer’s experience matters more than most companies fully appreciate.  You can be right 9 out of 10 times and feel like you’re in a good spot.  However, that one fail, to the “wrong person”, with a big enough audience, can be disastrous to your business.

While it just takes one rotten apple to ruin the lot, Elon’s disappointment with Twitter isn’t just one disappointed customer.  He has been polling the platform soliciting feedback for quite a while now.  This outreach to focus on the pulse of the customer is what Twitter should have already been doing.

Successful businesses listen to their customers, because the customer’s pay the owner’s salary.  So the question to you is when is the last time you sincerely solicited customer feedback?

We’ve talked about this a lot, but one of the fastest ways to capture market share is to leverage disruption.  In a perfect world this happens because you are personally disrupting a stagnant industry or marketplace like the new CTO (Chief Tweeting Officer) has done through this Twitter acquisition.

Alternatively, you can react and capitalize on someone else creating a disruption, like us writing this post about Elon’s disruption…just like David Meerman Scott did during the 2016 Presidential Election.  His quick reaction to the turmoil of the election resulted in national exposure for his business, and ultimately his revenue.

Love him or hate him, Elon is a genius when it comes to disruption.  His gift to the world is that he thinks differently than most.  This creates wild and chaotic thought and conjecture.  These are some of the ingredients needed to create game-changing ideas that fuel innovation.

While Elon is popularly known for running Tesla, SpaceX, and now Twitter, but he’s also running The Boring Company which is re-envisioning how to approach the ever-growing traffic issues plaguing our roadways.

The point is he sees a problem, and he authentically looks at that problem from the consumer’s perspective and starts gaming out new and innovative solutions.  At the very least you should be talking to your customers at least monthly.  You don’t get credit for saying you do because your reps do, you as the owner need to be hearing first hand what customers are saying.

The person that controls the voice controls the narrative.  On the surface Elon’s biggest reason for purchasing Twitter was to restore free speech in the digital-verse.  Yay for humanity!

As you look at mainstream social media platforms, Twitter has carved out it’s space as being a literal town square that allows anyone/everyone to rapidly share information creating instantaneous conversation.

Conversation and communications are the bedrock of marketing.  Elon’s immediate move, and his long-term marriage, will keep his name, and more importantly, his brand’s names at the forefront of infinite future conversations.

If you forget Twitter’s utility to consumers and the marketplace for a minute, this deal has expanded his existing brand equities at a scale I find hard to fathom.  The PR he has generated for his companies is priceless as this deal gets finalized.

Thinking of Twitter’s utility…Elon famously tweeted that if they sold 50k in Boring hats that they would debut a Boring Flamethrower.  Upon selling the 50,000 hat Elon Tweeted the sale of 10,000 flamethrowers, and within 4 days he’d raised $10 million dollars thanks to the exposure that Twitter can create at scale.

I only wish I could pick his brain one of these days…insert shameless plug to get him on our Ask an Expert series.  Asking for a friend, anyone…anyone?

We lied, we actually have four lessons around the Twitter takeover.

While Elon and crew look to improve the customer experience, one thing is largely being dismissed that is likely the most radical impact of this acquisition.  While virtuous in nature, this noble venture comes with a $44 billion investment that is going to need a return.  Interestingly enough, Elon is already talking about dramatically altering Twitter’s revenue model.     In the immediate he’s floating a subscription model that is less reliant on advertiser’s influence.

Applying a completely different model, one that requires payment to the actual user, is bold.  Set aside being the first main-stream social media platform to charge the user directly, it’s really a “put your money where your mouth is” kind of mentality.  This forces you as a company to really ensure that the value being provided equals or exceeds the cost to the consumer.

Conversely though, this is a significant blow to advertisers who rely on those eyeballs as a part of their marketing mix.  We hear the term shadow banned related to controversial figures on social platforms, but this subscription shift would instantly shadow ban most, if not all, advertisers on the platform.

How will they still be able to get in front of that target audience?  Well, that’s where a marketing firm like us comes into play.  Let me know if you want to have a conversation about your marketing needs.

I hope you guys enjoyed this dive into the new Twitter-verse.  If you didn’t, leave a comment explaining why as we’re pro-free speech too;-)